While the game of pickleball was invented over 50 years ago, the sport has only recently gained enough popularity where it can be seen being played in virtually every area in the U.S. We at Pleasant Valley Tennis & Fitness Club in Jackson, WI believe the immense growth of the game in recent years is likely due to the sport being easy to learn and fun for players of all ages and skill levels.

The origins of the sport trace back to Bainbridge Island, located just outside of Seattle, Washington. As with many sports, the game was invented by fathers, Bill Bell, Barney McCallum and Joel Pritchard, looking for a way to keep their children occupied.

The three dads were attempting to start a game of badminton but were unable to find shuttlecocks. Improvising, they borrowed elements from badminton, tennis, table tennis and whiffle ball to create a new game. Like tennis, this game can be played in a singles or doubles format, but the ball is perforated plastic, like a whiffle ball. There is a story that the game was named after Joel Pritchard’s dog, Pickles, who would steal the ball and run off with it. However, another tale says the dog was adopted after the game was invented and, because Pickles liked to chase the balls, the dog was named after the game. 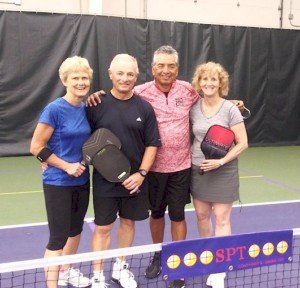 The rules and court are the same for both singles and doubles. Regulation courts measure 20’ x 44’, approximately the same size as a regulation double badminton court. As prescribed by the , the ball must be between .78 and .935 ounces with a diameter between 2.874 to 2.972 inches. Various paddles have been approved for official use, with companies regularly designing new paddles. Like tennis rackets, some of the more expensive paddles can cost up to $150, but cheaper options are available.

The game is played to 11 and must be won by two points. Points can only be scored while serving.

The server must use an underhand motion, swinging up and contacting the ball below the hips. The server must have both feet behind the baseline and the serve must go into the opposite service box, like tennis. Only one serve is allowed. If the ball lands out of the court, in the net or the no-volley zone then it is considered out. The center, side and baselines are considered in on serve, however, it is a side out if the ball hits on the no-volley line. If the ball hits the net and falls into the service box it is considered a let, with the server maintaining the serve.

The receiving player must let the ball bounce once before returning it. The ball must also be allowed to bounce once when it is returned to the serving side of the net before being hit. After the ball has bounced once, on each side of the net, the ball can then be returned without bouncing, provided the player is not in the “no-volley zone.”

The "No Volley Zone"

The No-Volley Zone is seven feet from each side of the net. A player is not allowed to hit a ball inside the No-Volley Zone without the ball bouncing first. The point is lost if a player commits a No-Volley zone infraction. The point is also forfeited if a player strikes the ball when it is not in the no-volley zone and the player’s momentum carries the player into the zone. The player is allowed to reach across the line to strike a ball as long as one foot stays behind the line.

Popularity of the Pickleball

The game is gaining popularity across the United States and around the world. The Sports & Fitness Industry Association tracks the popularity of various sports by registering the sales of the equipment used for those sports and calculated there were 2.815 million total players in the U.S. in 2014. That number represented a 1.8 percent growth rate from the previous year, earning the game the reputation of being one of the fastest-growing sports in the country. The latest figures, from 2018, showed a total of 3.1 million pickleball-players in the U.S. with 20,933 courts in the United States alone. 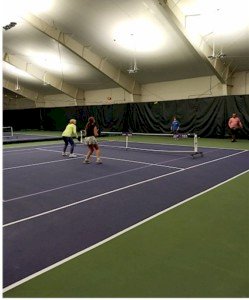 As a low-impact, non-contact sport, virtually anyone, of any age can play. In fact, an NBC story highlighted a 91-year-old tournament participant. Physicians recommend the sport to elderly patients as a good way of staying active. However, this is a game that can be as competitive as the players want to make it. The game is an excellent casual activity or can be as contentious and hard-fought as a tennis match.

The SPFIA distinguishes between players who play eight or more times a year and those who play less than eight times a year. A SFIA report broke down the players by age with approximately 75 percent of full-time players being 55 or older, whereas, conversely, 85 percent of casual players are younger than 55. The game is widely popular in small-town areas, like Vermont, and large cities, such as LA, and the Pacific Northwest, where it was invented. Perhaps not surprisingly, areas with large retirement communities, like Florida and Arizona, are hotbeds for the sport.

The USAPA has established programs designed to help the sport grow. These include two grant programs, the High School Grant Program and the Community Grant Program, which offers reimbursement for groups for the purchase of equipment. The USAPA Ambassador Program has over 1,500 volunteers devoted to spreading awareness of the program. These volunteers are involved in organizing and overseeing tournaments and acting as ambassadors for USAPA. 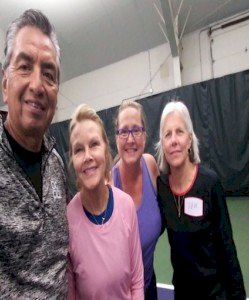 Many people are trading in their tennis rackets as a way to remain active while continuing to experience the competitive nature of racket sports, but without the physical intensity of tennis with playing on the smaller courts being less strenuous. Here the game offers the same health benefits of tennis, but with fewer injuries. The game is also relatively easy to learn, with the underhand serve being less difficult than tennis.

Many new players remark on how open and inclusive the pickleball-playing community is, being very welcoming to new players. While there can be very competitive play in national tournaments, with big brand sponsors and prize money, local leagues or clubs and even pick-up games at the local park have a very laid back and casual atmosphere.

Where to Play Pickleball

With over 6,880 USAPA designated locations to play as of 2019, with locations in every U.S. state and Canadian province, odds are high there is an official facility near you. Of course, PVTFC is now offering pickleball (Click Here for pickleball schedule). So, now that you have the question of “What is Pickleball?” answered, give us a call or stop by to learn more or get started with one of the fast-growing, and most enjoyable, sports in the world!